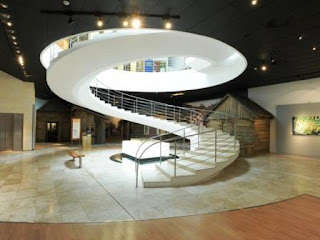 The South African Jewish Museum was officially opened by Nelson Mandela in December 2000. The brainchild of legendary South African philanthropist Mendel Kaplan, the museum has since established itself as one of the city’s must-see attractions.

While a relatively new institution, the South African Jewish Museum, like the community it depicts, has deep historic foundations. The museum has the distinction of being housed in South Africa’s very first synagogue (fittingly named the Old Shul), built in 1863. Formerly a dutiful record of the history of South African Jews in the Cape, in 1996 the decision was taken to refashion and reimagine the museum for a 21st Century audience.

A new state-of the art building was commissioned, and the scope of the museum expanded to encompass the full gamut of the history of Jews in South Africa – including the community’s historical roots in Lithuania and elsewhere, its instrumental role in the building of South Africa as we know it, as well as its noteworthy contributions to contemporary society. The Old Synagogue museum was transformed into a specialised general exhibit documenting Jews, Judaism and Judaica through the ages.

The new museum was conceived, founded and largely funded by visionary philanthropist, Mendel Kaplan (under the banner of the Kaplan Kushlick Foundation), who stood alongside Nelson Mandela and Helen Suzman at its grand opening in December 2000.

The museum has established itself as a Cape Town landmark, attracting locals and foreigners, schools and cultural exchange groups, and young and old alike, through its doors.

Netsuke is the Japanese name for miniature ceremonial carvings worn by the affluent merchant classes during the time of the Samurai.

Isaac Kaplan began collecting Netsuke in the 1960s, and developed the collection into one of the largest and most noted in the world.

The museum has on exhibition some 200 items from the impressive Isaac Kaplan collection. All are outstanding examples of Netsuke, dating from the 17th to the 19th centuries. Netsuke carved in ivory, staghorn and wood and ceremonial pipes and sword fittings created from precious metals trace the collector’s acquisitions over a thirty year period.

Touch screens enable the visitor to view the collection while accessing comprehensive information on the art of Netsuke. Audio guides are also available.

Our growing collection of beautiful Judaica caters to the local and international Jewish community, covering all aspects of Jewish life and holidays.

Rooted as we are in Africa, we have a remarkable collection of African Judaica, where local artists and crafts people have reinterpreted objects of Judaica in an African context, resulting in unique pieces of artistic merit.

We are in this respect supportive of job creation initiatives, both within the local Jewish community and the wider community, as well as small business initiatives and local crafters.

The shop also features a range of books that cover South African Jewish history, fiction, art, religion and cooking. There is a children’s section catering for the very young and teenagers, providing books on aspects of Judaism.

Gift certificates are available on request.